An un-wedding is what you do if you want to get married but don’t want a ‘wedding’. This one was like that, but with an added ‘f’ for fun.

As the handful of guests made their way onto MacMasters Beach for Carine and Jordi’s ceremony they were each asked to pick a token out of a bag. Not surprisingly, this piqued a lot of curiosity. But knowing Carine and Jordi well, the guests were not overly surprised at this otherwise unusual way to start a marriage ceremony.

Carine and Jordi are planning a big ‘wedding’ next year in Europe, where most of their families live. But due to their nomadic lifestyle, having a legal ceremony overseas was just going to be too hard (I could write a whole other post about this). So, they decided to get married (the legal bits) in Australia just weeks before jetting off for their next adventure. And of course when one of your best friends (me) is a celebrant this makes total sense.

So, Carine and Jordi hired a house at MacMasters Beach on the NSW Central Coast and we had a very small ceremony with close friends, Carine’s brother and their fur-child, Manel.

In the lead up to the wedding Carine and Jordi were totally swamped with finishing up at work and planning their move overseas, so didn’t really have time to put much thought in their ceremony. So, they put all their faith in me and allowed me to put something together that I knew was a perfect reflection of them and the kind of crazy cool couple that they are.

After acknowledging the traditional owners of the land, I told Carine and Jordi’s story (which included the movie Happy Feet, vodka stashed in desk drawers, a sexy polish accent and popping dance class) before getting into the nitty gritty of the legal part of the ceremony.

Carine and Jordi decided that they would save writing personal vows for their ‘wedding’ and would stick to legals only for their Aussie ceremony. Seeing an opportunity for a bit of fun, I decided to surprise them by writing vows for each of them to make to the other. Neither of them knew they were going to exchange these vows and neither of them knew what they or the other was going to say.

Carine is a massive Prince fan, so I trawled through Prince lyrics to put together some vows for Jordi to read to Carine.

Carine, You’re so good
Baby there ain’t nobody better
So you should
Never, ever go by the letter
You’re so cool
Everything you do is success
Make the rules
Then break them all ’cause you are the best
You don’t have to be rich
To be my girl
You don’t have to be cool
To rule my world
Ain’t no particular sign I’m more compatible with
I just want your extra time and your…
Kiss
I’ll never leave you standing
Alone in a world that’s so cold
Carine, nothing compares to you.

Jordi is Spanish so I did my homework (thanks Google) and made Carine read vows to Jordi in Catalan (his native language). We even had human subtitles so that everyone (but Carine) knew what she was saying.

Jordi, I have never loved anyone like I love you
I love you not only because of how you are, but also because of how I am when I am with you
No one has ever made me feel how you do
I will never stop loving you

Choosing just two witnesses from a small group of your closest friends was just another headache Carine and Jordi didn’t want to deal with. So when it came time to sign the paperwork, I asked each of the guests to pull a token out of a bag. This time it was the guests turn to be surprised as they found themselves part of a lottery of sorts. Whoever had the corresponding token to the ones Carine and Jordi pulled out of the bag were the witnesses.

At the end of the ceremony I made the guests promise to party like it was 1999. 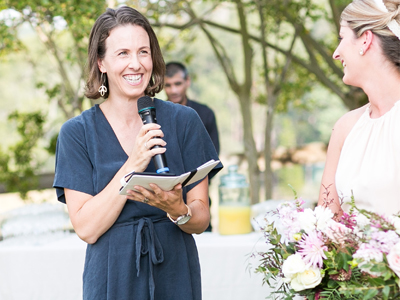 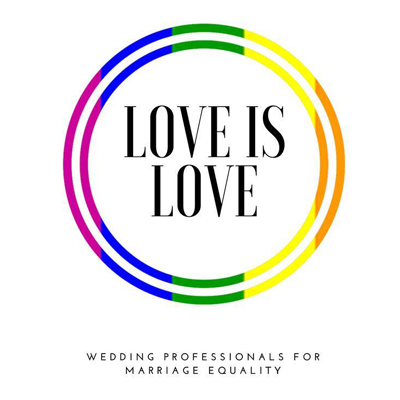